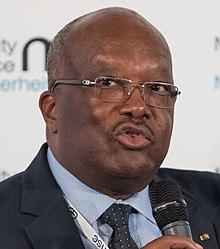 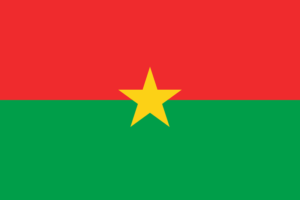 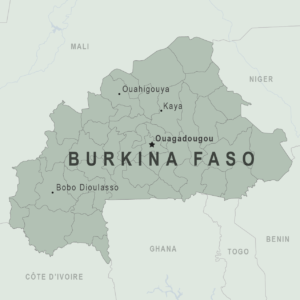 Burkina Faso is a landlocked country in West Africa that covers an area of around 274,200 square kilometres (105,900 sq mi) and is bordered by Mali to the northwest, Niger to the northeast, Benin to the southeast, Togo and Ghana to the south, and the Ivory Coast to the southwest. The July 2019 population estimate by the United Nations was 20,321,378.[10] Previously called Republic of Upper Volta (1958–1984), it was renamed “Burkina Faso” on 4 August 1984 by President Thomas Sankara. Its citizens are known as Burkinabé or Burkinabè (/bɜːrˈkiːnəbeɪ/ bur-KEE-nə-bay), and its capital is Ouagadougou. Due to French colonialism, the country’s official language of government and business is French. However, only 15% of the population actually speaks French on a regular basis. [11] There are 59 native languages spoken in Burkina, with the most common language, Moore, spoken by roughly 50% of Burkinabé.[12][13]

The leader of the leftist faction of Ouédraogo’s government, Thomas Sankara, was made Prime Minister but was later imprisoned. Efforts to free him led to the 1983 coup d’état, in which he became president.[14][15] Sankara renamed the country Burkina Faso and launched an ambitious socioeconomic programme which included a nationwide literacy campaign, land redistribution to peasants, railway and road construction and the outlawing of female genital mutilation, forced marriages and polygamy.[15][16] Sankara was overthrown and killed in the 1987 coup d’état led by Blaise Compaoré – deteriorating relations with former coloniser France and its ally the Ivory Coast were the reason given for the coup.

In 1987, Blaise Compaoré became president and, after an alleged 1989 coup attempt, was later elected in 1991 and 1998, elections which were boycotted by the opposition and received a considerably low turnout, as well as in 2005. He remained head of state until he was ousted from power by the popular youth upheaval of 31 October 2014,[17][18] after which he was exiled to the Ivory Coast. Michel Kafando subsequently became the transitional president of the country. On 16 September 2015, a military coup d’état against the Kafando government was carried out by the Regiment of Presidential Security, the former presidential guard of Compaoré.[19] On 24 September 2015, after pressure from the African Union, ECOWAS and the armed forces, the military junta agreed to step down and Michel Kafando was reinstated as acting president.[20] In the general election held on 29 November 2015, Roch Marc Christian Kaboré won in the first round with 53.5% of the vote[21] and was sworn in as president on 29 December 2015.